"Sometimes our qualifications don't check all the boxes, but if you keep trying and have faith in yourself, someone will be willing to take a chance on you."

You could be forgiven for thinking that Kelvin Thomas had been the person who inspired Dr. Seuss to write his last book, Oh, the Places You'll Go! Kelvin, as you will see, never has stood still for very long. His storied career is an example of what can be achieved by someone who is open to continual exploration and growth, has the ability to discover new opportunities and learn from them, and who is always ready to befriend - and in many cases mentor - the people he meets along the way.

During his 44-years with GAF, Kelvin has held 16 positions across five different facilities. This is an illustration of the breadth of opportunity across GAF Operations and a testimony to Kelvin's ability to build on experience and use it to keep moving on and up. Kelvin's "first real paying job" was in his hometown of Tuscaloosa, AL, on the third shift clean-up crew. He quickly moved to a position as a Dump Truck Driver within his first year - and he hasn't slowed down since.

Throughout his career, Kelvin has always focused on challenging himself to do and know more — which has resulted in a myriad of roles and opportunities across the function, as well as across the country: from Alabama to Texas, then to New Jersey and back to Texas again.

The move from Texas to New Jersey provided an exciting opportunity to work in the corporate office and to see GAF from a new angle. However, this 1,700-mile relocation would mean big changes for his family: "The guy from Alabama who moved to Texas was now being challenged with moving my family to New Jersey. My wife graciously agreed to the move because she knew I was in full pursuit of going as far as my abilities and talents would take me," says Kelvin.

Kelvin learned to lean on the many GAF-ers who were there to help during every step of his journey. Reminiscing on his time in Tuscaloosa, he says, "There were challenges and obstacles starting out, but there were those who encouraged me to push through them. The Tuscaloosa plant has a family-type environment."

When Bob Pine became Tuscaloosa's plant manager around 1988, Kelvin met with him and saw an opportunity to grow and expand his skills. He applied for literally every job he felt he was qualified for. After about six months of applications and interviews, he was promoted to the role of Operations Coordinator. "Sometimes our qualifications don't check all the boxes, but if you keep trying and have faith in yourself, someone will be willing to take a chance on you," explains Kelvin. Despite not fitting the bill "on paper," Bob took a chance on Kelvin and gave him the chance to grow into a new and exciting role.

Today, Kelvin prides himself on developing others - in the same way that mentors had taken a chance on him: "I was inspired through this coaching and mentoring process because it helped me to leap forward in my personal and professional leadership skills," explains Kelvin. "I set out to duplicate this process and put to use all that I had learned from both my failures and successes." On top of professionally mentoring others at work, both of the youth YMCA baseball and basketball teams he coached were championship winners.

There and Back Again

Each professional step forward has inspired Kelvin to reinvest in his own development, furthering his own potential. He completed his college degree at Stillman College while working full-time for GAF. In what he describes as an "unexpected gift," GAF covered his final two years of tuition through the employee tuition reimbursement program.

Stillman is a fixture for Tuscaloosa employees to this day, as many of them pass the campus on their daily walk to work. Many of them noticed it falling into disrepair. Kelvin states in a local news article, "As the team would pass, they saw the blue tarps and had some real concerns about the building. And then contact was made to make a generous offer to Stillman College." GAF pledged $100,000 to restore Stillman's Winsborough Hall, and Kelvin was able to help award the donation to his alma mater. 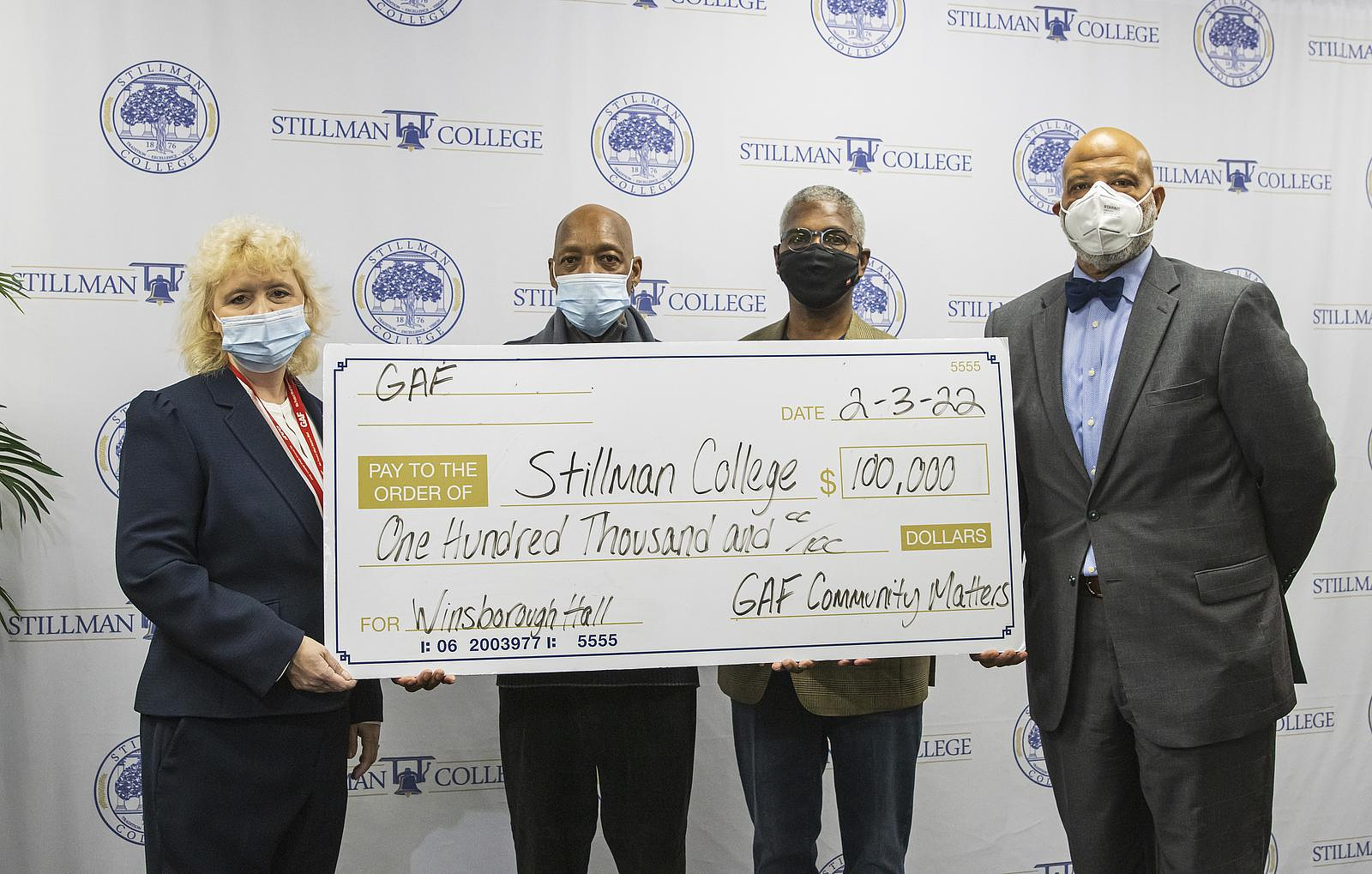 In his new position as Vice President, Operations Culture and Employee Engagement, his career has come full circle. "I started my career in the plant as a frontline worker, and now I have returned with years of experience to share and shape the future of our current frontline team. Thanks, Tuscaloosa, for the start, the foundation, and the life lessons that carried me throughout my journey."

Inspired? Learn About Opportunities with GAF.

Never naturally one for the limelight, Kelvin was willing to share his story to give an example of what's possible and help inspire others to think about all the fulfilling places they can go — and the things they can achieve — in their careers. To learn about opportunities with GAF, visit the GAF Careers page.

EVERGREEN
PROFILES
EMPLOYEES
IN YOUR COMMUNITY
TEXT
INTERVIEW
More homes and businesses in the U.S. are protected by a GAF roof than by any other product. We are the leading roofing manufacturer in North America, with plants strategically located across the U.S. As a Standard Industries company, GAF is part of the largest roofing and waterproofing business in the world.
RELATED ARTICLES
A Story of Roofing Success: Erasmo "Mitos" Fuentes
LEARN MORE

Critically acclaimed actor — with a roofing industry background — Anthony Mackie has teamed up with GAF and their Community Matters initiative to help rebuild Gulf Region roofs hit by extreme weather.
By Annie Crawford
YOUR HOME
Top Six Common Roof Types & How to Pick One for Your Home
LEARN MORE

It's easy to think that there are as many roof types as there are buildings. In truth, there are only a few standard kinds and variations are made by combinations of these. The type of roof you select for your home or addition will influence a lot of other factors, including overall cost, what materials you can use, and how much of the roof is visible from the street.
By Dawn Killough
IN YOUR COMMUNITY
GAF's Sustainability Promise: A Year of Social Impact
LEARN MORE

"As industry leaders, we have a responsibility to use our expertise and resources to make a positive impact on our communities and our planet, which is why we've set these ambitious goals. We are making strategic investments to achieve those goals and, ultimately, to leave the planet better than we found it for our children - and their children." -Jim Schnepper, CEO of GAF, Earth Day, 2022
By Jeff Terry
LATEST UPDATES
RESIDENTIAL ROOFING
What Is It Like to Be a Roofer?
LEARN MORE

To get a firsthand account of what it's like to be a roofer, GAF spoke with Trenton Wisecup, president of Arrow Roofing Services in Michigan, and David Laurain, Arrow Roofing's vice president, to learn about their experiences in the roofing industry.
By Dawn Killough
COMMERCIAL ROOFING
How Commercial Skylights Can Boost Revenue
LEARN MORE

Historically, commercial skylights have gotten a bad rap. "The old joke was: 'if it's not leaking now, it will be soon,'" says Brian Grohe, a 13-year vet of the skylight industry and a commercial sales manager at industry leader VELUX. Fortunately, technology has changed that old tune for the better, turning commercial skylights into a golden opportunity for roofing contractors.
By Annie Crawford
IN YOUR COMMUNITY
Helping to Mitigate Urban Heat Islands with GAF StreetBond® Pavement Coatings
LEARN MORE

Around the globe, excess heat collects in urban areas and can contribute to increased heat-related death and illness, diminished quality of life, and reduced economic opportunities. Such areas are known as "urban heat islands." Fortunately, cooling strategies are now available and being used in initiatives like the GAF Cool Community project to help mitigate urban heat island effects. Such cooling strategies are supported by products such as such as GAF StreetBond® pavement coatings with Invisible Shade™ - named by TIME magazine as one of its Best Inventions of 2022.
By Annie Crawford
IN YOUR COMMUNITY
Helping Stillman College Breathe New Life into a Historic Building
LEARN MORE

The GAF manufacturing plant in Tuscaloosa, Alabama sits just a half mile away from Stillman College, a historically Black university with a rich history in the area. The school was first formed as the Tuscaloosa Institute in 1875 by the Presbyterian Church to serve as a ministerial training academy for Black men. It was renamed in 1899 - after the director whose idea it was to found the academy - Rev. Dr. Charles Allen Stillman.
By Karen L Edwards
IN YOUR COMMUNITY
Roof Raiser Anthony Mackie: A Superhero Helps Rebuild Gulf Region Communities
LEARN MORE

Critically acclaimed actor — with a roofing industry background — Anthony Mackie has teamed up with GAF and their Community Matters initiative to help rebuild Gulf Region roofs hit by extreme weather.
By Annie Crawford
YOUR HOME
Top Six Common Roof Types & How to Pick One for Your Home
LEARN MORE

It's easy to think that there are as many roof types as there are buildings. In truth, there are only a few standard kinds and variations are made by combinations of these. The type of roof you select for your home or addition will influence a lot of other factors, including overall cost, what materials you can use, and how much of the roof is visible from the street.
By Dawn Killough
This blog contains information created by a variety of sources, including internal and third party writers. The opinions and views expressed do not necessarily represent those of GAF. The content is for informational purposes only. It is not intended to constitute financial, accounting, tax or legal advice. GAF does not guarantee the accuracy, reliability, and completeness of the information. In no event shall GAF be held responsible or liable for errors or omissions in the content or for the results, damages or losses caused by or in connection with the use of or reliance on the content.