Can Energy Efficiency be Further Improved?

The energy efficiency of a building's enclosure is generally analyzed in terms of thermal resistance. This is a static property and doesn't take into account the time of day and the effects of thermal mass. This article shows how adding thermal mass to a roof assembly might offer a way to improve energy efficiency, especially for buildings only occupied during daylight hours such as offices and schools. In addition, thermal mass could help reduce electric grid demand swings.

In the first part of this series the use of thermal mass to slow down heat flux through a roof assembly was discussed. In buildings where air conditioning costs dominate and heating use is relatively low, higher thermal mass assemblies can potentially improve energy efficiency. This is particularly the case of buildings such as offices that are only occupied during daylight hours. Thermal mass could delay the transmission of heat into a building towards the end of the day, increasing thermal comfort and allowing facility managers to reduce cooling demand during working hours.

In the second part of this series the physical properties that contribute to thermal mass were described. The key property values for common roofing materials were listed.

This article shows how thermal mass can significantly affect heat flow through some example roof assemblies.

In any roof assembly, the amount of thermal energy entering a building is reduced and delayed as shown below: Conventional building enclosure design normally considers only thermal resistance and not the potential delaying effect of thermal mass. There are several key characteristics of thermal mass; time delay and the decrement factor.

The time delay is calculated as:

Where t[Tout(max)] and t[Tin(max)] are the times of day when the inside and outside surface temperatures reach maximum. Time delay could be important for buildings that are only occupied during the day, such as offices. The time delay caused by a building's enclosure could be why some offices become uncomfortably hot during the late afternoon, as the HVAC system fails to compensate for the heat flow into the interior space.

The decrement factor, DF, is calculated as:

The DF is a measure of the dampening effect of the building enclosure on external temperature swings.

The key physical properties for some common roof assembly components are shown below (derivation of these values was explained in part two of this series):

Calculation of the effects of thermal mass has been described in the international standard ISO 13786. A validated tool from HT Flux was been used to perform the calculations for four roof assemblies: 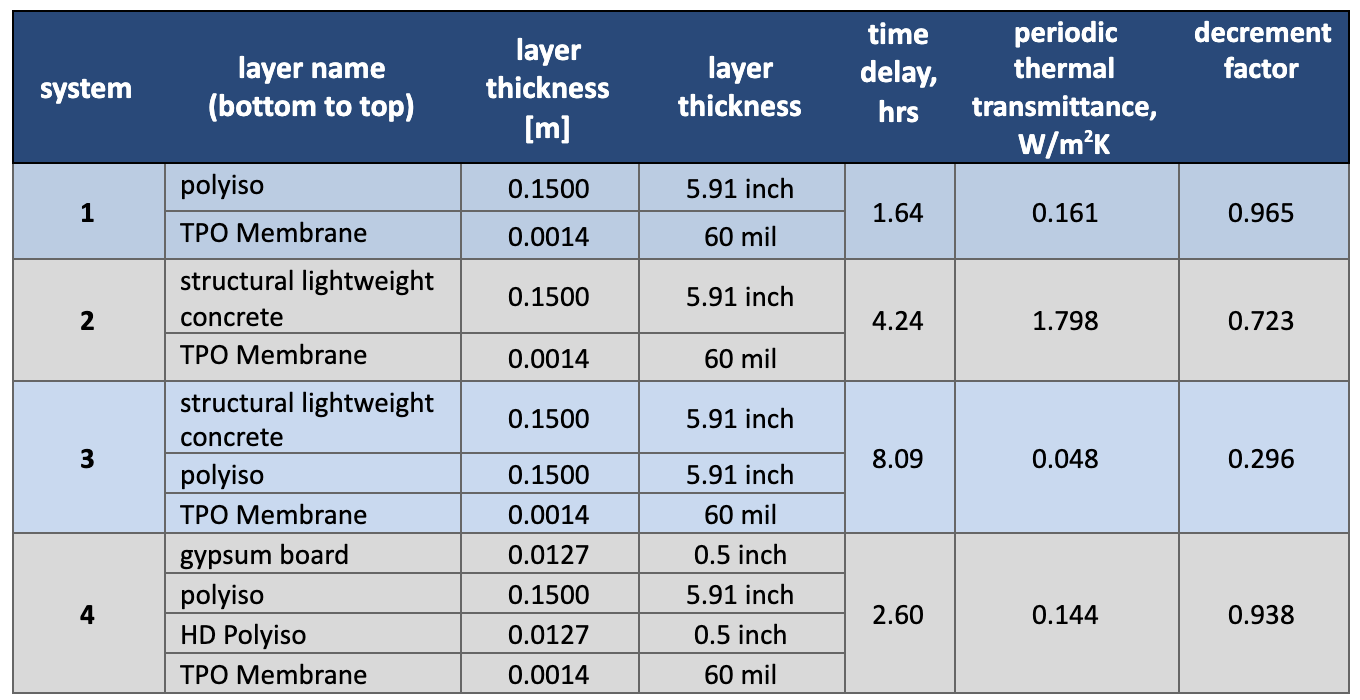 System 1 is a well-insulated assembly often found over steel decks (R-value of approximately 34).

System 2 is included for comparison, having no additional thermal resistance above that of the concrete deck.

System 3 is for a combination of polyiso insulation over a lightweight structural concrete deck.

System 4 represents an example of a high performance roof assembly. The gypsum board is used as a possible base for a vapor retarder. The HD polyiso would provide for improved impact resistance.

The table shows the time delay between the peak external temperature and the internal peak temperature. System 1, based on polyiso over a steel deck, has a time delay of 1.64 hours. This potentially explains why the top floors of buildings become warmer during mid-afternoon periods in the summer. The external temperature will peak between noon and 1pm when the sun is overhead. However, the heat flux into the building is delayed until 2 to 4 pm.

A structural lightweight concrete roof with no added insulation, System 2, is projected to delay the peak internal temperature by 4.24 hours. However, a combination of lightweight structural concrete deck with polyiso delays that peak temperature by over 8 hours (System 3). This would mean that, for an office building, the peak heat flux into the building would be delayed until after normal working hours.

A high performance roof assembly over a steel deck, System 4, delays the peak temperature by 2.60 hours. Such an assembly is optimized for impact resistance and includes a gypsum board as a substrate for a vapor retarder. This time delay would still result in the peak heat flux into the building being during working hours for a building occupied only during the day.

System 3, consisting of a structural lightweight concrete deck, polyiso, and TPO membrane has the lowest periodic transmittance of 0.048 W/m2K. This means that System 3 not only has a large time delay in peak heat flux, but that the amount of energy entering the building through the roof would be lower. The polyiso insulation helps resist the heat flux and the lightweight structural concrete has a high density so that it absorbs what heat does come through the polyiso. This would have the effect of significantly dampening the effect of exterior temperature swings and increasing occupant comfort.

For buildings such as offices, schools, and any other building occupied only during daytimes, the combination of high thermal resistance and thermal mass could have a significant advantage. The combination of a large time delay and low periodic thermal transmittance for System 3 would lower the thermal demand on air conditioning units and also reduce temperature swings within the building. This would improve comfort for occupants as well as reducing HVAC cycling. (Of course, energy cost savings are not guaranteed and the amount of savings may vary based on climate zone, utility rates, radiative properties of roofing products, insulation levels, HVAC equipment efficiency and other factors.)

A further benefit of adding thermal mass to roof assemblies could be that, by delaying heat transmission into a building, peak demands on the electric grid might be reduced. Typically, air conditioning demand results in large grid loads during afternoon hours during summer periods. By delaying heat flux into buildings it might be possible to not only smooth out interior temperature swings but also swings in electrical demand on the grid.

Thanks to Martha VanGeem (www.vangeemconsulting.com) for commenting on an earlier draft of this article. Martha is a notable authority on the topic of using thermal mass in construction to both improve energy efficiency and dampen electrical grid demand.

It used to be that you didn't see many women in roofing. That's slowly changing. Although women in roofing currently make up less than roughly half a percent of all roofing professionals in the United States, that narrow slice represents a growing number of women in the industry.
By Karen L Edwards
LATEST UPDATES
YOUR HOME
Roof Shingle Color Trends for 2022
LEARN MORE

Roofing renovations were a top exterior upgrade in 2021, and continue to dominate the home improvement market in 2022. As you might plan to renovate or replace your roof, it makes sense to also think about what roof shingle color you should choose.
By Annie Crawford
YOUR HOME
Choosing the Right House and Roof Color Combination
LEARN MORE

An attractive house and roof color combination can give your home a major boost in curb appeal. Not only does adding visual appeal make the place feel like it's yours, but it also brings a higher resale value. On average, homes considered to have curb appeal sell for 7% to 14% more than similar homes with less visual appeal, according to the Journal of Real Estate Finance and Economics.
By Annie Crawford
IN YOUR COMMUNITY
Sustainability Beyond Sustainable Roofing Products
LEARN MORE

At GAF, our commitment to protect what matters most means more than manufacturing sustainable roofing products. It includes investing in our people, our planet and our business so we can work toward a more sustainable future.
By GAF Roof Views
COMMERCIAL ROOFING
Protecting Your Building from Hail Roof Damage
LEARN MORE

Up to 25% of the United States experiences large hail episodes-and when they do, hail can cause severe damage to roofs and the HVAC equipment stored there. Hailstorms account for 70% of the average annual property losses from severe convective storms in the US. Building owners can protect their buildings and equipment by designing their buildings and roofs to withstand the damage caused by large hailstones.
By Dawn Killough
COMMERCIAL ROOFING
Capacitación para contratistas especializados en techos: apoyo en todos los niveles
LEARN MORE

In business, time is money. With advanced roofing technology, you can save time, improve your team's efficiency, and boost your company's bottom line all at once. Ranging as widely as business management systems that streamline productivity and digital measuring tools, here are a few roofing products and solutions to incorporate into your business so you can work smarter rather than harder.
By Wendy Helfenbaum
This blog contains information created by a variety of sources, including internal and third party writers. The opinions and views expressed do not necessarily represent those of GAF. The content is for informational purposes only. It is not intended to constitute financial, accounting, tax or legal advice. GAF does not guarantee the accuracy, reliability, and completeness of the information. In no event shall GAF be held responsible or liable for errors or omissions in the content or for the results, damages or losses caused by or in connection with the use of or reliance on the content.